“Huntington c.a.l.m. (citizens appeal for leafblower moderation) with over 2,000 supporters, educating the public nationwide about the harm caused by the highly polluting two stroke gas leaf blower. our goal is to limit the use of glbs by commercial landscapers from may 15 through september 15, when residents spend more time outdoors.”

The Huntington Town Board, at its May 9 meeting, took a significant step toward establishing a demonstration program replacing gas-fueled landscaping equipment with battery-operated units at Heckscher Park and Town Hall, creating a “Green Zone” with reduced emissions and less noise.

The Board approved a resolution co-sponsored by Supervisor Frank P. Petrone and Councilwoman Susan A. Berland to retain the American Green Zone Alliance (AGZA) to conduct a study that will analyze the Town’s existing landscape practices, recommend the appropriate, cost-effective battery powered equipment and instruct Town personnel on the use, care and maintenance of the devices.

Headquartered in Studio City, California, AGZA is a leader in a nationwide effort to help communities address noise and air pollution issues. It provides certification and accreditation in zero-emission landscape maintenance strategies; educates individuals, property owners, and landscape maintenance professionals to reduce or eliminate the use of gasoline powered maintenance equipment in favor of cordless electric and manual equipment; and promotes those strategies through its Green Zone certification program that allows the owners of properties of any size to create, maintain, and promote their own zero-emission Green Zone. It is working with the town of Southampton on a similar project.

The resolution follows more than a year’s worth of discussions with Huntington CALM (Citizens Appeal for Leafblower Moderation), a citizen’s advisory and advocacy group with over 1,600 supporters whose goal is to limit the use of gasoline-powered leaf blowers by commercial landscapers from May 15 through September 15, when residents spend more time outdoors. CALM representatives have appeared before the Town Board and met with Supervisor Petrone and Councilwoman Berland. The group also arranged a test of battery-powered equipment at Heckscher Park for Town officials.

“I appreciate huntington calm’s efforts to raise our consciousness about the environmental effects and health dangers of gas-powered landscaping equipment, including significant noise pollution”

“Heckscher Park and Town Hall are perfect locations for a demonstration program to test the feasibility and efficiency of battery-powered equipment that reduces emissions and operates at significantly lower decibel levels than gas-powered equivalents. I look forward to seeing, and not hearing, the results,” Supervisor Petrone said.

“This resolution is a great first step to protecting our environment and reducing air and noise pollution in our Town,” Councilwoman Berland said. “Many constituents have contacted me to restrict the use of Gas Powered Leaf Blowers to address their quality-of-life concerns. I encourage everyone to visit the Town’s website, watch my public service announcement and complete our leaf-blower survey. I look forward to working together with Huntington CALM and the American Green Zone Alliance to create a ‘Green Zone’ at Heckscher Park and Town Hall."

“Huntington has always been a beautiful place to live, work and raise a family. let’s keep it that way.”

View the Original Article on the Town of huntington website 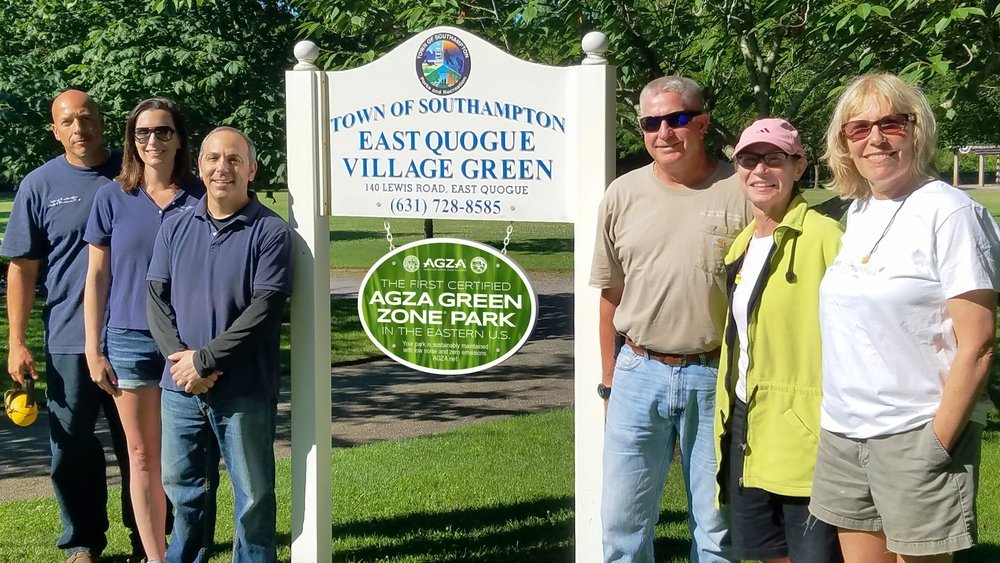 Southampton Town Councilwoman Christine Scalera, local officials, residents, and environmental organizations will celebrate the dedication of the first American Green Zone Alliance (AGZA) Green Zone Park in the Town of Southampton and eastern United States at the East Quogue Village Green on Wednesday, June 21 at 10:30 a.m. The project, led by Councilwoman Scalera in partnership with non-profit, Quiet Communities, and the AGZA, will bring electric-powered maintenance equipment to the park. By replacing gas-powered equipment, such as leaf blowers, the Town will reduce levels of noise and completely eliminate emissions at the park.

"Establishing a Green Zone at the East Quogue Village Green is a starting point to test innovative equipment and techniques that would improve the quality of life for residents in terms of noise and air quality, which is consistent with the action goals of the Towns Sustainability Plan," stated Assemblywoman Scalera.

“It is my goal to continue to establish green zones on town owned lands throughout the town of southampton.”

A certified AGZA Green Zone is a defined area, such as a park, hospital, or school campus, where routine maintenance is performed with zero emissions, low noise equipment, and manual tools. AGZA is the global leader in sustainable zero-emission grounds maintenance strategies and Quiet Communities in the Eastern lincensee for AGZA's Green Zone program. It informs municipalities, businesses, and schools on risks associated with the use of commonly used industrial equipment. There are alternatives and AGZA's Green Zone program is focusing on one place at a time to start changing the way communities perform maintenance.

“The agza green zone at the east quogue village green will provide a cleaner, healthier environment for workers, neighbors, children, visitors, and pets who enjoy the park while increasing awareness in the community about how sustainable alternatives can improve quality of life for its citizens.”

AGZA President, Dan Mabe, has helped to create more than 25 certified Green Zones on the West Coast. In partnership with Quiet Communities, AGZA is bringing the program to the East Coast! "On the West Coast, we have proven that commercial sized properties can be maintained without gas-powered equipment at the same level of quality and at lower cost. We look forward to bringing these benefits to the East and other parts of the country," said Mabe.

The Towns Parks and Recreation Department participated in a demo during 2016 with Mean Green Products to test out their electric powered equipment, including full size lawnmowers. The Town has since purchased a fleet of state-of-the-art electric battery equipment that will achieve the same aesthetic in a much healthier and more sustainable manner.

Referring to a 60 inch deck mower, Southampton Town's Parks Maintenance Supervisor, Jon Erwin, stated, "It's amazing how such a large mower can be so quiet." According to Mean Green, this lawnmower is about 15-20 decibels quieter than a comparable gas engine product.

"Parks maintenance staff members use power equipment on a daily basis and after testing the electric products, and getting a better sense of how they function and perform, they're very enthusiastic about their implementation," added Kristen Doulos, Town Parks Director.

Southampton Town has started a trend as several other Long Island towns have begun to follow their lead. The Town of Huntington has recently voted to create an AGZA Green Zone at Hecksher Park. "This is just the beginning of a movement on Long Island and New York State," said resident Bonnie Sager, co-founder of the group Huntington CALM. "We will reduce our carbon footprint and improve the health of our workers and our neighborhoods. We applaud the Town of Southampton for their foresight and leadership."