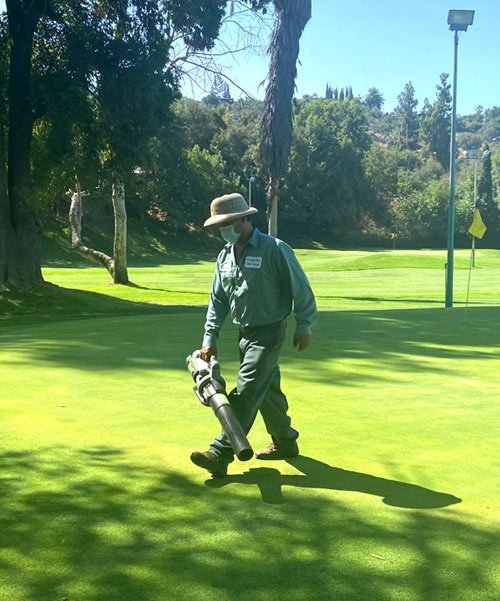 It’s 4:45 Sunday morning at Arroyo Seco Golf Course in South Pasadena.  It is almost pitch black and the chorus of birds singing can be heard in the background.  There are residential homes adjacent to the course who can practically call the golf course their back yard.

On this day, the American Green Zone Alliance (AGZA)  meets with the grounds crews for a “shadow” outing to verify that the crews are honoring the AGZA Green Zone Certification the golf course pledged to uphold by using only electric hand held tools for routine everyday maintenance.  These tools are blowers, weed-whips, hedge trimmers, edgers, and chainsaws.  Under the certification the course is also using a 52″ Mean Green electric mower and an electric greens mowers which was recently converted to a lithium platform.

AGZA is also there to continually track and verify the performance, durability, and workload capability of the various electric equipment used to maintain AGZA Certified Green Zones.  Any tool that shoulders the responsibility of Green Zone certifications has to be exceptional.  Today’s outing was focusing on the blower use.  Every morning seven days a week, three hundred and sixty five days a year, the dedicated crews wake up at before the crack of dawn to prep the course for the first tee times which start at 7:00 AM.  Part of this everyday ritual is blowing off all eighteen greens to prep them for the greens mower.  AGZA shadows grounds crew member Mike in the darkness to his first area around the club house and practice putting green.  After that he heads for hole number one and maintains a rigorous and steady pace to stay ahead of the greens mower which is using head lights for the first few greens waiting for the sun to finally show itself.

Mike is using an EGO, 580 CFM handheld blower.  He started with a couple of other brands but settled into this particular model from EGO.  He likes the sound profile, power, and ergonomics.  The crews stressed that they have to be picky and discerning on even which “electric” leaf-blower models they use that early in the morning.  Dan Mabe President of AGZA states “not all electric blowers translate to noise relief”.  The reason for this he explained is that different brands may have similar dB ratings but the harmonics and the pitch can be harsh on the ears with some models out there.  EGO scores very high among only a handful of other AGZA AFTC© Certified electric blowers on the market.

Mike uses up to three EGO 7.5 amp hour lithium batteries to completed is morning workload.  He informed us that he usually discharges two full batteries and half of the third one.  These particular batteries are seventeen months old and are used every single day.  AGZA tracks the fuel savings with the crews achieved by using battery power instead of gas and two-stroke mix previously used to power their gas leaf blowers.  The reduced maintenance of their electric blowers compared to their old gas ones is always enthusiastically mentioned by the course crews.  Other EGO equipment used at the course is the commercial LBX6000 blower, and HTX6500 Hedge trimmer.